The Best Season To Visit Langkawi Malaysia benefits from predictable weather. It’s consistently hot, with sunshine and showers all year round. It pours occasionally, but the changes in weather are usually minimal and not drastic. These same characteristics also apply to Kedah’s most popular island attraction – Langkawi Island!

Langkawi’s peak season starts from November until March. This is the BEST season to visit Langkawi. The weather during this time is pleasant and suitable for any fun island experiences you can think of! Langkawi’s favourable position on the North-Western coast of the Malaysian Peninsula means that the island is safe from major winds and storms. This is due to the mainland on one side and Sumatra on the other forming a natural barrier. The dry season is from November to March. During this time, rain is minimal and most activities on the island can be carried out. It can get quite hot, with temperatures hovering around 35°C. Make sure to apply enough sunblock and bring along enough clothes to change out of when you inevitably get covered in sweat. It also the peak season with large crowds and some queueing at major attractions.

The wet season lasts from September to mid-November. This is due to monsoon rains that pour for a couple of hours on an almost-daily basis. There will also be small bouts of rain from April to August. This is due to island gearing up for the full-blown during September.

Is it impossible to visit during this time? Not necessarily. Rain usually pours later in the day, and only last for 2-3 hours. Generally, it doesn’t get really wet in Langkawi. However, you’ll still have to prepare yourself for sudden changes in plans due to rainy weather. Some water or outdoor activities may also have to be postponed.

Langkawi has two main weather seasons: the dry season from November to March, followed by the wet season from April to October. February is usually when temperatures reach their hottest peak, while September to October is the wettest period. In the monsoon season, rain lasts for 2-3 hours and generally occur later during the day.

Why Is It Important To Know The Best Season To Visit Langkawi?

There are two main reasons.

As you would expect, Langkawi is more expensive to visit during the peak season (dry) due to increased tourist demand. This time also coincides with Malaysia’s annual long school holidays towards the end of the year. Whenever there are major holidays in Europe (Christmas, Easter etc) there is also an increased influx of visitors that contribute to high hotel prices. Prices for accommodation and tour packages will increase. Even services such as car rentals and flight tickets cost more during the peak season. Resorts are often fully-booked weeks in advance, especially in touristy areas such as Pantai Cenang and Pantai Tengah. You’ll have to plan and book ahead if you intend to stay at these areas.

Vice versa, prices go down during the wet season. You’ll find lower rates all around, from hotels to car rentals. If you are keen to rent your own vehicle and travel across Langkawi, then plan your trip during this season.

In the dry season, most days are bright and sunny. The sky will be extremely clear and the sea is calm. This is the time where the island’s activities will be in full swing. You’ll have ample opportunities to visit that bar you’ve read about, or snap great photos of natural limestone formations while on a cruise. 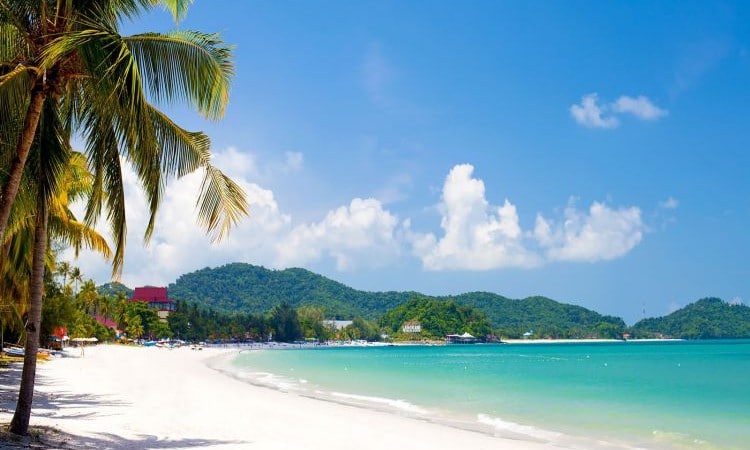 All resorts, parks, and attractions are open. Apart from the occasional shower, Langkawi is dry and you can enjoy your holiday activities without worries of any weather disruptions.

The wet season brings with it rain that dampens the bustling activity atmosphere of Langkawi. The wettest period of Langkawi is from September to October. During this time, you’ll have restricted access to the ocean and water-based activities as the waves are stronger and more violent. Some boat trips may be postponed or cancelled because of this. Water sport activities may also be affected, subject to water conditions. But to be honest, Langkawi is perfectly visitable even during the wet season, depending on the traveller. As long as you have your umbrella handy and a list of indoor attractions such as museums, malls, galleries, cafes etc, you’ll be all set for a relaxing cultural experience at Langkawi despite the rain. In fact, another upside is easy accessibility to usually-crowded tourist places. During the low season, you won’t have to queue to enter your favourite restaurant or attraction.

The Best Season To Visit Langkawi For Nature-Lovers

For nature lovers, the wet season is the BEST season to visit Langkawi! If you intend to see the lush rainforests & landscapes in full bloom and greenery, then this is the best time to do so. A cool climate (from 25°C at night to 30°C during the day) and a cloudy sky further provides a compelling reason to explore the island’s jungles and hilly trails without worrying about sunburns and uncomfortable heat. One of the best things about the rainy season is that you can avoid the scorching sun beating down on you all day long. Whether you’re exploring the island’s underwater beauty, the hilly scenic grandeur of Langkawi, or wandering around the town area’s bustling streets, the lack of a blistering sun on your back is always appreciated. The lack of crowds also contributes to the peace and tranquillity of the ancient rainforest. You can explore your favourite attractions without worrying about queues or large families.

So When Is The Best Season To Visit Langkawi?

It is widely agreed that November to March is the best season to visit Langkawi. This is the peak season where the whole island is busy catering to tourists from different countries and interests. The weather is bright and sunny, and the waters calm and offer great visibility. Most travellers shouldn’t face any major issues while travelling during this period. But, Langkawi benefits greatly from less drastic weather throughout the year. Even during the rainy season, Langkawi doesn’t get too wet or impossible to navigate. You definitely won’t find your holiday severely ruined while visiting during the wet season.

This means more freedom to visit anytime throughout the year. Different seasons may appeal to different travel crowds and interests. It’s not fixed in stone, and that’s what we love most about Langkawi! Where to Stay in Langkawi

I'm Bryan and I try to travel as much as I can! When I'm not traveling, I play the guitar. I'm also the resident writer for HolidayGoGoGo. Top 5 Camping Spots in Malaysia Where You Can Enjoy Hiking, Swimming & More The Ultimate Travel Guide To All 7 Tioman Island Villages The Beautiful Islands Of Johor: Pulau Besar And Its Neighbouring Islands